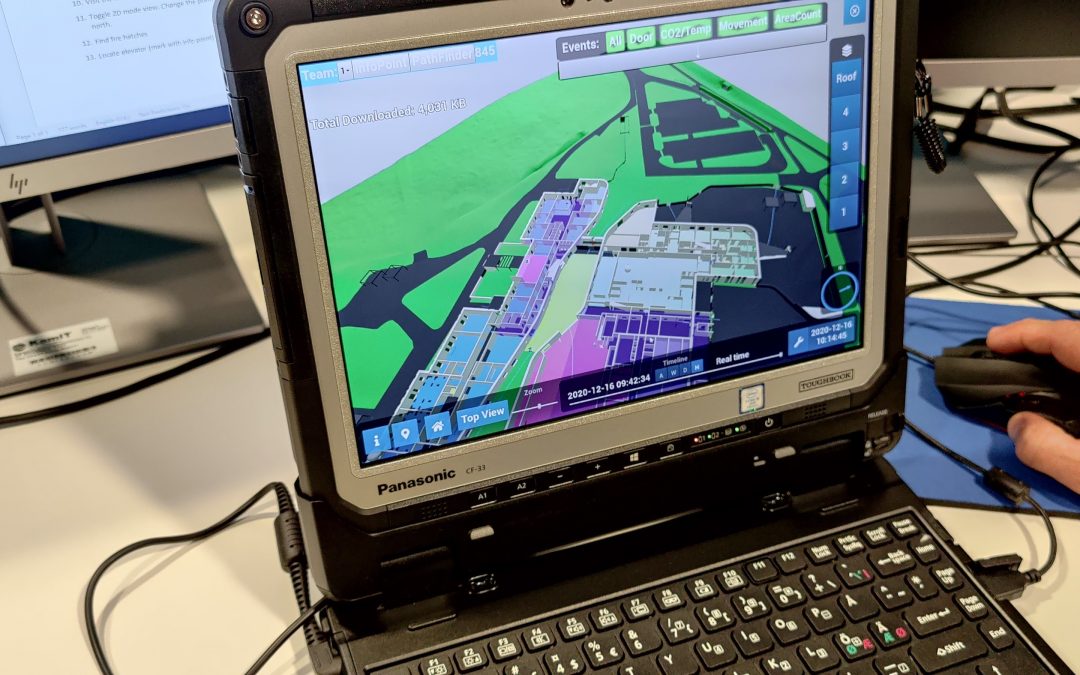 The tool is internally referred to as BUST – Building Situation tool.

The KAMK tools is comprised of two parts, data collection from various sensors placed inside the building, and a 3D model running on a computer, where the building is visualized, and all sensor information is displayed. The pre-installed sensors continuously collect data from the building, and in case of abnormal values, such as high temperature, smoke detection, or high CO2 levels, the program notifies the fire department of the potential risk.

During the Finnish pilot, the first responders trailed the system in two scenarios: explosion of man-made device, and fire outbreak.

Through the sensors placed in the building, and data recorded prior to the explosion, the first responders were able to estimate the number of persons in the vicinity of the explosion, review which nearby sensors recorded high temperatures to get an estimate of the explosion radius, and check for ongoing fires through smoke and CO2 values. Although the sensors within the explosion room were damaged, the sensors in the vicinity provided the relevant data. By monitoring the door state sensors, the first responders knew how potential smoke and fire would spread. Nearby movement, door state and person counter sensors informed of ongoing movement of persons.

During the fire outbreak, the first responders were primarily at the explosion site. The fire broke out on the opposite side of the building, a floor above. The first alert came through BUST, where high temperatures and smoke were detected. As there was an active perpetrator in the vicinity, who the police was planning to apprehend, the first responders had to look for alternative access routes through the path planning feature of BUST, to access the fire site safely and quickly.

The feedback will be used to improve the tool for further training, and the final pilot taking place in March 2022.

Watch the video at https://www.youtube.com/watch?v=825ZJwU6qQw .