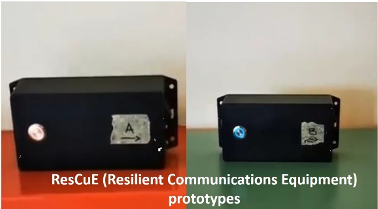 ResCuE (RESilient CommUnications Equipment), an innovative device that can operate autonomously for several hours, is being developed by COmputer Networks & SErvices Research laboraTory- CONSERT, based on research concepts from the successfully completed project STORM, and complemented and enhanced through the work done in project FASTER. ResCuE can be deployed in the first moments that First Responders arrive at a scene, after a disaster  has damaged the communication backbone infrastructure. A key feature of ResCuE is that it is capable of efficiently and securely broadcasting messages to the general public (and First Responders), on mobile devices using encryption.

This low-cost device by taking advantage of critical information communication channels, can propagate (or relay) short text messages during cases of emergency, with no Internet connectivity, where all electronic and electrical means for power or communication are unavailable both to First Responders and Civilians. As an example, messages like “Evacuate the stadium through section B gates” or “avoid the elevator and stairs, stay inside and close the doors” are possible examples of messages that could provide meaningful instructions under special occasions. ResCuE is expected to reach an area of 100 m2 which can be further extended by the deployment of a mesh relay network consisting of multiple ResCuE nodes.

Having identified the potential that the RESCUE device has, a plan for exploitation of the device is considered through a UniWA spinoff. For this, a patent application has already been filed at both the European (first) and USA (second) patent office.