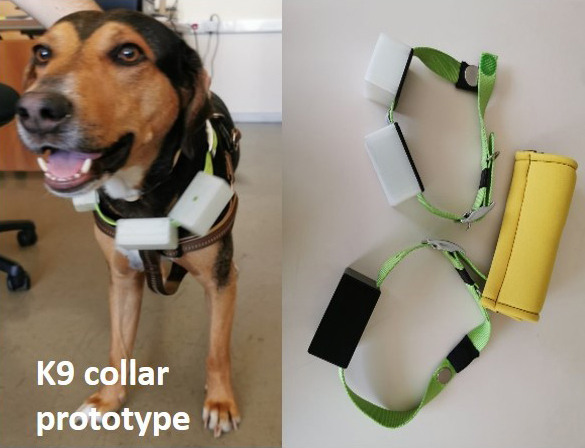 COmputer Networks & SErvices Research laboraTory- CONSERT is developing a novel wearable device for K9s, featuring sensors (i.e. 3-axis accelerometer and gyroscope) able to capture and transmit in real time motion signals and situational status of K9s. The data from these sensors will feed a Deep Learning model that will be able to provide results regarding the activity of the K9 and convert it to specific messages that can be transmitted wirelessly to First Responders.

At the same time, the definition of a communication protocol will be studied to translate the K9’s behaviour (i.e., movement or bark) into a pre-recorded message addressed at the person in need in order to inform him/ her about the K9’s role and provide some useful tips that should be followed to facilitate the First Responders’ work. Through smart application, the location of K9s will be able to be monitored.

An early prototype of the collar was presented in a meeting between researchers from CONSERT with the Hellenic Rescue Team of Attica – HRTA, which took place on 26th of June. The early prototype of the collar features a 3-enclosure design in order to be less obtrusive and provide for load management. Detachability is achieved through the use of magnets to allow the dog to break free if trapped under debris. For the moment, the prototype is tested in lab trials that are entering the phase of data collection to train the Artificial Intelligence algorithms.