On the 26th of June, researchers from COmputer Networks & SErvices Research laboraTory- CONSERT, participated in a collaboration meeting with members of the Hellenic Rescue Team of Attica, for the implementation needs of the tools to be offered by FASTER.

More specifically, a Deep Learning model will be implemented on wearable devices (e.g. smart watches to be used as equipment for FR), to match motion signals to predefined movements, to be used during their operations on the field. From the collaboration with the FR teams that are members of the FASTER Project, four (4) such emergency hand signals were initially selected.

The rationale for the choice of movements is that they have been successfully used for communication in the past, in aircraft rescue and firefighting situations. When a FR performs one of the predefined movements, the algorithm records it and processes it to generate emergency messages in the form of alerts that will be distributed to nearby FRs’ smartphones and the Portable Control of Operation, in order to provide accurate and real time information about the situation on the field.

In the photos you can see the training of the system by members of the Hellenic Rescue Team of Attica. In addition to the notifications that appear on the FR’s phone (or smartwatch) in the field, FASTER will try to enhance the delivery of these notification messages in the field of action by using short vibrations on the wearable devices, based on the actual MORSE code. As the communication infrastructure often crashes during emergency situations, MORSE alert messages will be transmitted using IoT communication protocols (e.g. Bluetooth Low Energy, BLE). 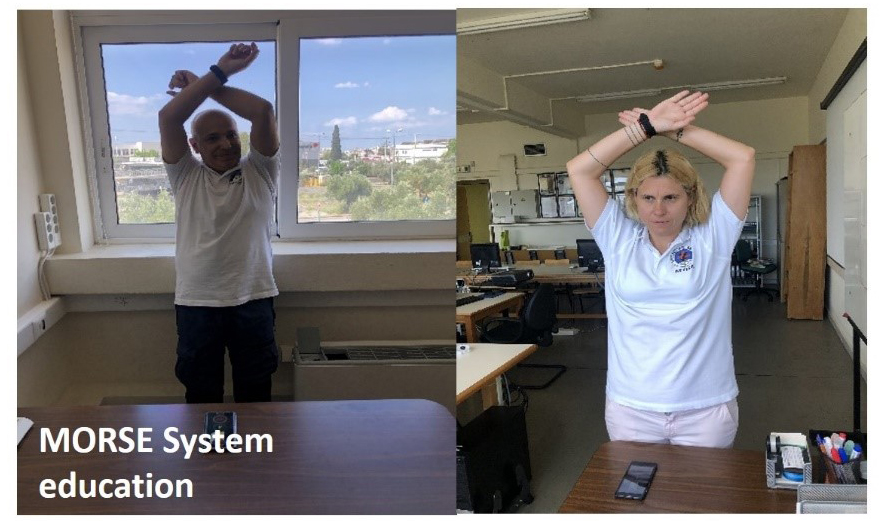